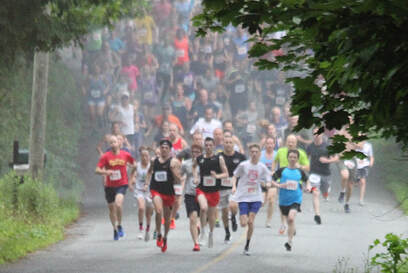 The Liz Harris Cannonball Run is a 1-mile race held on Schoolhouse Road in Preston on the third Thursday of June. Proceeds benefit the St. James Parish youth programs, including the LHCBR Kids to Camp program.

A Brief History of the Liz Harris Cannonball Road Race
Our road race was established in June 1992, after the untimely death of Liz Harris.  Liz was a member of St James Episcopal Church and involved in many youth programs.  She was known as Aunt Liz to hundreds of children in the Preston community.
The first memorial road race was organized by Father David Cannon, Mark Ruffo, Tim and Kris Anne Kane and Phil Ludlow.  Seventy-five runners between the ages of 6 and 78 started at the intersection of Cooktown Road and Route 164 with a finish line in front of the Preston Plains Middle School.  Runners were shuttled to the start line in the Troop 75 Boy Scout bus.  Race Director Mark Ruffo explained the instant success when he said, “We’ve had a lot of support basically because this is in honor of Liz.”
Since this humble start, the race has been a huge success with the number of runners increasing each year.  In 1995, with over 100 runners, the race was moved to Schoolhouse Road for a safer running environment.  The race starts with a blast from our black powder canon echoing through the village.  An average of 200 runners stream past while spectators shout “It’s only a mile to make a kid smile” and cheer the runners on.  The Poquetanuck School grounds provide a rally point for registration, spectators, refreshments and an awards ceremony where thousands of door prizes and hundreds of medals have been awarded over the years.
Our road race has raised over $186,000, sending nearly 900 deserving children to various summer camp programs throughout the United States and abroad.  In addition, four high school runners are sent to Green Mountain Running Camp each year through Tim and Kris-Anne Kane Scholarship Awards.  The David L Cannon award is presented to the first child between the ages of 6 and 10 to complete the one-mile race.  Our event has been acknowledged in Runner World magazine and several local newspapers.  This success is due to the 1000 volunteers who have invested their time and energy to this cause.
Challenged by Covid-19 restrictions in 2020, the 29th Annual Liz Harris Cannonball Road Race morphed into a Car Parade to benefit our “Kids to Camp” program while honoring those who were working on the front lines during the pandemic.  The parade kicked off at the Liz Harris Softball Field at Preston Community Park, paused for the traditional canon shot at the Poquetanuck School grounds and ended with blaring horns at the intersection of Schoolhouse Road and Route 2.
In 2021, the pandemic continued to rage.  Restrictions required social distancing and mask wearing, which were nearly impossible with 200 people gathered at the start line, so in the interest of safety the road race was cancelled.  The Phil Ludlow Open Golf Classic was held, following all Covid-19 guidelines, netting over $2200 for the “Kids to Camp” program and sending 21 kids to camp.
We look forward to hosting the 31st Annual Liz Harris Cannonball Road Race in 2022.  Join us on Schoolhouse Road and be amazed at the ability of a small crew to stage a big event.  Better yet, get involved by volunteering or entering the race.  After all, “It’s only a mile to make a kid smile.”